The power of a whisky brand can fire names of modest Scottish towns and villages to global fame. Glenmorangie, Glenfiddich, and Highland Park stir an interest in the towns of Tain, Dufftown and Kirkwall for people sharing whisky with friends across the globe – tragically, three places visitors might gloss over when piecing together a travel itinerary if it weren’t for Malt Whisky.

Wolfburn Distilley in Thurso now exports bottles labelled with our town and county names all over the world. Their oldest barrel of whisky recently turned 6-years old – a relative baby in the world of Single Malt Whisky, making it an enticing prospect to connoisseurs and casual sippers everywhere.

Their flagship expression, Northland, is a perennial award winner; far from being a hinderance, Wolfburn’s youth is an extra source of intrigue. Like Thurso, Wolfburn is yet to be discovered for a lot of people – a bit of a detour from the beaten path, but as one of the only remaining hand-operated and independently owned whisky distilleries in Scotland, it’s worth the trip.

There are no computers at Wolfburn doing any switching on or off or monitoring the distillation process. Only the skill of the production team keeps the quality of the spirit so consistent: they manually do the sampling, keep track of the timing, monitor temperatures and make the cuts (decide the exact moment that the best part of the distillate is being produced and divert it onto the next stage in the process). Pretty cool stuff in an age of automated mass-production.

The inaugural Highland Whisky Festival in May this year seeks to make the craft of the Wolfburn production team more accessible to people – extending the whisky circuit from Tomatin all the way up the coast to Thurso, and then to our well-established neighbour Old Pulteney in Wick.

Things are definitely a little warmer now in the shadow of Old Pulteney, and not just because of Climate Change. Frankly, it’s bloody nice to have barrels of spirit laying down in Thurso developing their own unique character again.

Wolfburn happens to be an extension of old Thurso Malt Whisky Heritage as well as the modern driver of it. Not content with opening a distillery just anywhere, the owners, who themselves have Caithness connections, chose land from which they could harness the water source that gave life to the last distillery to make a Thurso dram. The distillery is in Henderson Park in Thurso, and it draws both its name and water from a small nearby river called Wolfburn – burn being a Scots word for stream.

Keen to see what was happening about the place before the festival rolls into town, we crept past the fierce looking metal wolf guarding the distillery entrance to ask a few questions of one of the people behind Wolfburn – Charlie Ross.

Charlie, what’s the story with the wolf out front? – The Sea Wolf from our label is part of Norse folklore, a mythical creature that, if you saw it, would bring you a gift. The label artwork was drawn by a Swiss artist called Konrad Gessner as part of a book about ‘Four-footed Beasts!’

It’s very fitting given the name and location of the distillery and Thurso’s Norse heritage. The sculpture is amazing – Carn Standing, an artist from Portsoy, built it just from looking at a drawing.

How long have you been at Wolfburn? Five years. For the first three years, there were only two members on the production team, and they were too busy to have much time for visitors, so tours were by appointment only. As more and more people are attracted to the area and the distillery it’s become necessary to have a full-time tour guide here – we’re now doing tours every weekday at 2pm and the shop is open from 10am-4pm.

What does Wolfburn look like in 10 years? Building-wise there will be at least one more warehouse. The production staff will probably be the same – four plus the production manager. Whisky-wise, we’ll have age-statement single malts from around 2025, which would be a 12-year old – may be earlier, we’ll wait and see.

There seem to be a few changes happening in here, what’s going on? – We’re expanding the shop out into the still room, so there’ll be more space for whisky and customers.

In three words, how do you describe the character of Wolfburn Single Malt? – Smooth, fruity, delicate*

Okay, and what’s a ‘must see’ for visitors to this area? – Go and see Duncansbay Stacks – as a bonus you’ll see some puffins, and you might see orcas.

*To be clear, Charlie is talking about the whisky, not the fine people of Thurso. 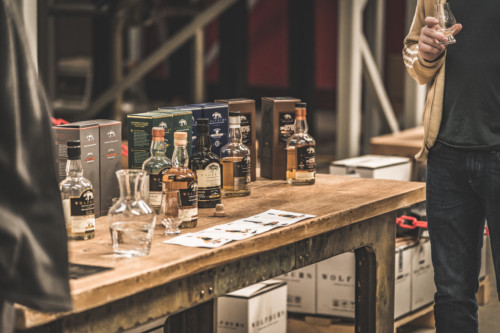 Visit Charlie and the team while you’re in town – the Wolfburn shop is open 10am-4pm, or catch a tour at 2pm.

For more information about future whisky fun in the far north of Scotland, keep tabs on the Highland Whisky Festival.

Like these photos? Drop us an email for more information about photographer Stevie Bruce. 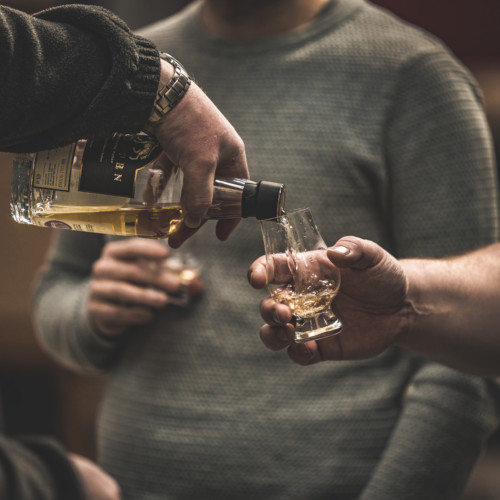 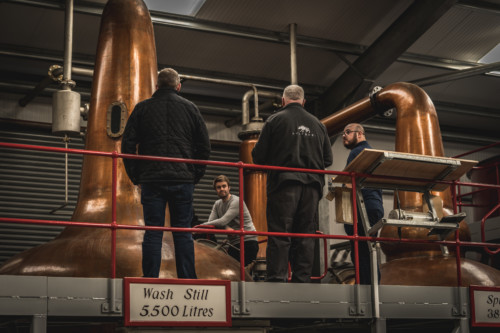